By Wagner Society Qld on 9:19 am in Essays & Reviews

Acclaimed Wagnerian soprano Nina Stemme had a triumphant return to Hobart on November 2nd 2019 to sing an all-Wagner program at a packed Federation Concert Hall. She was magnificently accompanied by renowned bass-baritone John Lundgren and the Tasmanian Symphony Orchestra (augmented by players from the Australian National Academy of Music) and the Tenors and Basses of the TSO Opera, all under the baton of Conductor Laureate Marko Letonja. 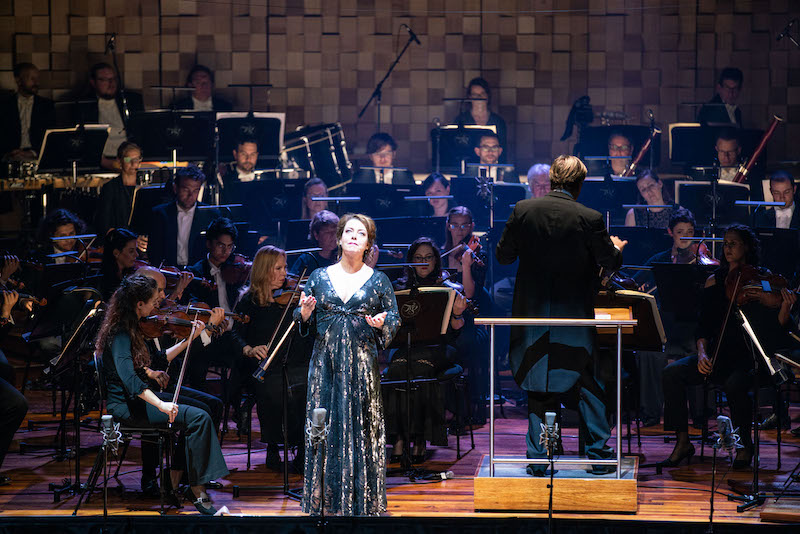 The concert featured excerpts from three works only, Der fliegender Holländer, and Die Walküre and Götterdämmerung from the larger work Der Ring des Nibelungen, and included some of the most beautiful parts of these works.

Opening the first half of the concert John Lundgren was immediately convincing as the angry god Wotan discovering the treachery of his beloved goddess-daughter Brunnhilde in the battle between Hunding and Siegmund. Nina Stemme’s Brünnhilde was equally stirring and her spine-tingling Ride of the Valkyries from Act lll captured both the terror and the beauty of these warrior goddesses with their larger-than-life personas. The impassioned dialogue which ensued between father and daughter was finely sung and acted by both performers and I was struck by the waxing and waning of the arguments between them as he berates her for foolish meddling and she implores his understanding and charity for his own kin. John Lundgren’s Wotan was of the implacable steely kind, and his decision to revoke his spirited daughter’s godhead and banish her to her fate upon her flame-encircled rock made his subsequent farewell more than usually heart-wrenching, with Nina Stemme’s vocal and acting skills wonderfully capturing Brünnhilde’s shame and dismay.

The second half of the concert began with the overture from Der fliegender Holländer, followed by John Lundgren delivering an extremely eloquent and compelling Dutchman’s Monologue. Nina Stemme then took the stage and following Siegfried’s Funeral Music from Act III of Götterdämmerung concluded the concert with a beautifully-sung Brünnhilde’s Immolation. The TSO played particularly well at this point and the various leitmotifs, blended skilfully by Wagner to create this magical music, could be clearly heard to wonderful effect.

Overall this was an extremely enjoyable concert with both singers in magnificent form, the orchestra playing beautifully and the subtle but effective lighting by Bengt Gomér providing atmosphere without being intrusive. Marko Letonja’s previous experience with the TSO as Chief Conductor from 2012-2018 was evident, as was his understanding of working with singers, particularly in Wagnerian productions, and apart from a couple of brief moments the singers could always be clearly heard above the huge orchestra. Nina Stemme enjoyed considerable success in Hobart in 2016 with Stuart Skelton in excerpts from Tristan und Isolde. Here with fellow Swede John Lundgren – with whom she has sung this role before – she was outstanding as Brünnhilde and brought real magic and command to a role that is pivotal to these operas. John Lundgren was an excellent vocal match and both his Dutchman and Wotan were impressive.

The thunderous standing ovation at the conclusion of the concert said it all, and I think many of those present floated out of Federation Hall still buoyed by the magic of the night and the splendour of that final Götterdämmerung D-flat major chord.

Wagner, Schumann and the other ‘Tristan’
A Wonderful Experience: Parsifal in an Unusual Place

Twenty-first Annual General Meeting FOLLOWED BY A TALK ON THE NIBELUNGENLIED, BY GEOFFREY FISHER