Wagner and Liszt: The Anxiety of Influence
A talk and recital by Ammiel Bushakevitz

This event in the Boardroom, 3rd floor, at the Conservatorium will be followed by refreshments celebrating Richard Wagner’s 205th birthday.

Liszt was already a well-known figure in the musical world when he met Wagner, so the question of musical influence inevitably arises, primarily regarding harmony and the use of Leitmotifs. Who influenced whom and by how much? Upon hearing Liszt’s Orpheus, Wagner wrote that he found it “incomparable in its beauty and perfection”. Wagner developed in huge strides from his early stage works such as Die Feen and Rienzi to the late splendour of Parsifal. Similarly, Liszt’s music progressed from the bravura of his early showpieces to the mystical asceticism of his final years. Wagner’s leap from the triadic harmony of the Ring to the chromaticism of Tristan und Isolde is very likely to have been influenced by Liszt’s symphonic tone-poems of his Weimar period.

A more intimate aspect is the personal relationship between Wagner and Liszt, especially from when Wagner became Liszt’s son-in-law by marrying Cosima. 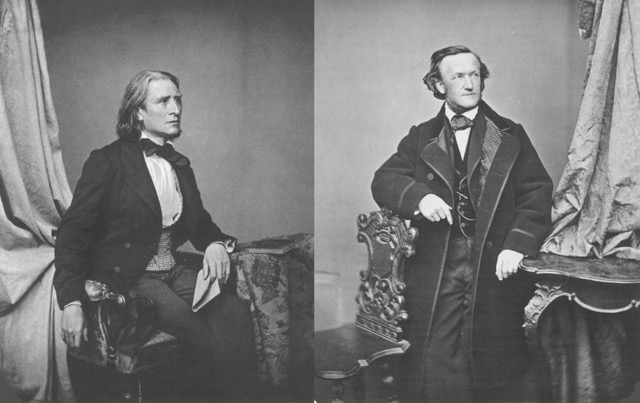 “The two photos were taken in the same year – 1860, by Hanfstaengl in Munich. Liszt was just two years older than Wagner, even though he became his father-in-law, so they look very much contemporaries.”

Another aspect to be discussed is one on which Liszt and Wagner disagreed: the connection between music and nationalism. The 19th century saw the rise of national pride in many European countries and Liszt gave generously to the cause of Hungarian independence. Nevertheless, Liszt remained the cosmopolitan he had always been. Just as he felt at home in many countries, Liszt’s music overcomes national borders – German, French, Hungarian and even Italian. On the other hand, Wagner felt that musical style and nationality are intrinsically bound together – a sentiment shared by later composers who were influenced by Wagner, such as Debussy, Bartok and (of interest for Australians), Percy Grainger.

Ammiel Bushakevitz is internationally acclaimed as one of the upcoming pianists of his generation. Born in Jerusalem, Israel and raised in South Africa, Mr Bushakevitz performs regularly at notable venues across Europe, North America, Africa and Asia. Festival appearances include the festivals of Salzburg, Bayreuth and Lucerne, the Festival d’automne à Paris, the Festival Pontino di Latina in Rome, the Pablo Casals Festival in Barcelona, the Jerusalem Schubertiade, the Vancouver Chamber Music Series in Canada and the Festival d’Aix-en-Provence, France.

For a number of years, Mr Bushakevitz has been especially involved with the music of Wagner. In 2011 he began giving lecture recitals about Wagner’s compositional methods and was invited to present lectures on Wagner’s Der Fliegender Holländer internationally. In 2012 he was granted the Richard Wagner Scholarship of the Richard-Wagner-Verband Leipzig and performed as pianist in Bayreuth as part of the Bayreuther Festspiele. In 2013 he was the first recipient of the Richard- Wagner-Nachwuchs-Preis, awarded on the 200th anniversary of Wagner’s birth by the mayor of Leipzig.

After initial studies in South Africa, Mr Bushakevitz studied at the Hochschule für Musik und Theater “Felix Mendelssohn Bartholdy” in Leipzig, Germany under Phillip Moll. Thereafter he furthered his studies under Jean-Frédéric Neuburger and Pierre-Laurent Aimard at the Conservatoire National Supérieur de Musique in Paris, France. During his studies he received further artistic mentorship from the notable pianists Boris Berman and Alfred Brendel.

In 2013 Mr Bushakevitz released his debut solo CD, an album of the late piano works of Franz Schubert recorded in the Salle Fleuret in Paris. The album was selected as “album of the month” by Cape Town’s Fine Music Radio. He has since recorded another Schubert album (Lisbon 2016) with the German label Hänssler Classics, an album of Mozart sonatas for violin & piano with his sister Avigail Bushakevitz (Barcelona 2015, Solfa Records), and a CD of Liszt’s songs with the US tenor Timothy Fallon (Jerusalem 2015), which was released in 2016 on the Swedish label, BIS Records.

In addition to his activities as a soloist, Mr Bushakevitz has a special affinity to the art song and has received mentorship from notable singers including the late Dietrich Fischer-Dieskau, Elly Ameling, Thomas Quasthoff, Thomas Hampson, Matthias Goerne, Barbara Bonney and Teresa Berganza. One of the last private students of Dietrich Fischer-Dieskau, Mr Bushakevitz was invited in 2011 by Fischer-Dieskau to accompany his masterclasses at the Universität der Künste in Berlin and at the Schwarzenberg Schubertiade in Austria.

Mr Bushakevitz dedicates time annually to educating aspiring young musicians. He presents masterclasses at the Jerusalem Music Academy and has offered music workshops and benefit concerts for schools and cultural societies in developing countries including Ethiopia, Zimbabwe, Morocco, Egypt and Mexico, often in collaboration with the Goethe Institute and the Alliance Française.

Also active as a musicologist, Mr Bushakevitz specialises in research concerning Franz Schubert and Richard Wagner. In 2011 he presented a paper on Schubert’s piano music at the International Conference on Late Schubert in Dublin, Ireland. He is an alumnus of the Deutscher Akademischer Austauschdienst, a member of the International Hugo Wolf Academy and an honorary member of the Wagner Society of Leipzig.