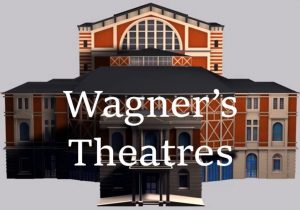 For most of his adult life Wagner wanted the Ring to be performed in an egalitarian style of theatre inspired by the amphitheatres of ancient Greece and Rome. He even considered a floating stage on Lake Lucerne and a temporary one in a field outside Zürich. When King Ludwig’s efforts to build a monumental Festival Theatre for the Ring in Munich came to naught, and Wagner turned his attention to a relatively modest structure in the provincial town of Bayreuth, the relationship between king and composer became strained. Peter will look at the early drawings and models developed by Gottfried Semper for performances of the Ring, and the influence that these plans had on the design of the Bayreuth Festival Theatre.

Click on the link below to view a printable complete programme for 2019:
Programme 2019